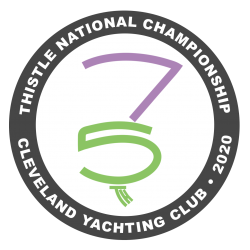 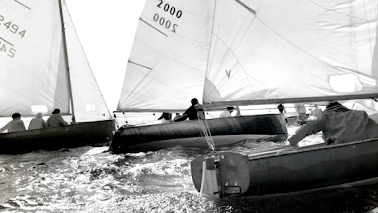 Thistle Fleet No. 1: A cruise down memory lane

To the extent that I did grow up, much of it happened at the Cleveland Yachting Club. And most of my early memories are of sailing in Thistles. I can remember riding on the wooden bow seat of Thistle No. 3 when I was too small to get there by myself. I remember riding in the cushy back seat of Sandy Douglass’ Citroen DS-19, a strange and remarkable French sedan, trailing a Thistle to launch at Put-in-Bay. We sailed to a deserted Rattlesnake Island, where we pulled the boat up on a rocky beach for a picnic.

In the 1960s and ‘70s, as I got older, CYC’s Thistle Fleet No. 1 was in its heyday. There were over 35 Thistles stored on floating rafts circling the club’s North Basin, bordered by a shaded lawn still known as the Thistle Green. A lot happened on that green.

Gathering of the OFC

The fleet held races every Saturday afternoon and Sunday morning, always followed by a gathering under the huge willow tree, always with a beer keg, many times with a picnic. Everyone sat on blankets covering the whole green. Songs were sung and pranks were played. To a very young kid, the most amazing rite was the periodic gathering of the OFC. Banging makeshift instruments, a procession of weirdly dressed fleet members would parade to the keg and make pronouncements, introductions and initiations. All very bewildering and kind of magical to a 10 year old. There was a Grand Wazir and a bunch of other titled characters, all, it turned out, organized for one specific purpose: to stop the young upstart Jack Wanenmacher from winning so many races. I remember one song sung to the tune of “Swing Low, Sweet Chariot”: “Stay low, Jack Wan-a-maker, comin’ for to carry me high.” Another song aimed at Jack Rupert, who ran a savings and loan: “Jesus keeps his money in the Broadview Savings Bank, Jesus saves, Jesus saves, Jesus saves.” I eventually found what “OFC” stood for: Old Farts Club.

No SUVs on the porch

A lot went on that, as kids, we never really knew about. Many stories were only recounted long after the event, and certainly not by any of the participants. Two involving my father come to mind: The old clubhouse had a wide porch wrapping around most of the building. One afternoon or maybe late evening, on a bet, my father drove a “borrowed” Jeep onto that porch. The club didn’t find the stunt amusing, and he was nearly kicked out.

Fire in the hole

Another story involved Bill Irwin, another member of the OFC. Aboard his cabin cruiser one Fourth of July, Bill was tossing lighted cherry bombs from down below up to my father, who was sitting on the aft deck and, naturally, had to toss them overboard fairly quickly. Things were going smoothly until one of the firecrackers didn’t explode … until a small Lyman outboard ran over it. The explosion blew a hole in the Lyman big enough that they had to scramble to get it to the haul out ramp before it sank. Somehow they managed to cheer up the hapless Lyman guy — probably utilizing some form of alcohol.

As we got older, we started to contribute to the lore ourselves. One Nationals, or maybe Great Lakes, at CYC, when the fleet’s Thistles were still stored on the rafts and the after-race party took place around the keg on the Thistle green, Chris Klotz got a great idea: The party was pretty much over, and there was still about a half keg left. Drink some more? Nah. Why not hoist it up to the top of Jim Irwin’s mast? Yeah! C’mon. Great idea, except it turns out a Thistle main halyard can only hold the weight of a keg long enough to get it up to the top of the mast. Twang! The keg fell and smashed through Jim’s forward grating. Oops. For some reason, Jim was extremely unhappy. He got over it, though, and renamed his boat Keg-of-my-Heart.

Give me a hand

George Wharton provided another classic: One Saturday night at a big Thistle regatta, the Bagatelle I think, he and a number of other recalcitrants were engaging in a popular but absolutely forbidden recreation: the Midnight Swim. The CYC pool, which was surrounded by a 10-foot-high wall, was closed and locked. It was great fun to find a dark corner of the wall, climb over, and sneak into the pool for a dip. This night, while splashing away, the gang got a little too boisterous and attracted the attention of the security guard, who unlocked the gate and went in to investigate. He found George and his pals in the pool and ordered them out, asking for names. George obediently swam over to the guard and politely asked, “OK, but would you please give me a hand?”

“Sure,” said the unsuspecting guard. George reached up, took hold of the guard’s hand, and, instead of getting out, pulled the guard in. The gang made a quick getaway while the guard spluttered in the pool.

There are many more stories from Fleet No. 1, some of which actually involve sailing and racing. But you’ll have to ask around and get those on your own. And maybe someday, if you’re the proactive type and work hard to have fun, they’ll be telling stories about you. Enjoy the Nationals!

The 2020 Thistle National Championship, presented by KeyBank, celebrates the 75th anniversary of one of North America’s most popular and competitive one-design sailing classes. The regatta takes place August 1-7 at the Cleveland Yachting Club in Rocky River, Ohio. 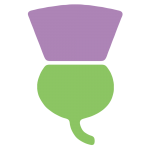